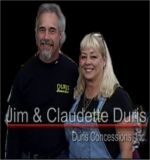 Jim and Claudette Duris are professional, fulltime food vendors. They own the company outright and always have been a two-person privately held corporation and registered in the state of Washington since 1978. Incorporated in 1991.

Jim Duris opened his first concession business at age 22. He hasn’t stopped since then. His wife, Claudette, joined him in 1982. They have three grown children.

Duris Concessions, Inc. has been in business for over 41 years.

They have done all the major fairs in Washington state and all the major events in the greater Puget Sound area, including Seattle, since the late 1970’s. The Duris' have decades of experience in handling large and persistent crowds. In recent years Duris has branched out into corporate events, company picnics, major retailer grand openings, such as Home Depot and WalMart and private parties.

Original Northwest Elephant Ears have been a star performer at the Western Washington Fair, the 6th largest in the nation, which is located in their hometown of Puyallup, Washington for over 35 years. The Duris' have fifteen major locations there. Each year over 150 people are hired with a dedicated core of about 40-50 employees returning yearly. Some have been with Duris Concessions for over 30 years.